This article is still under construction! Last updated on 3 June 2021 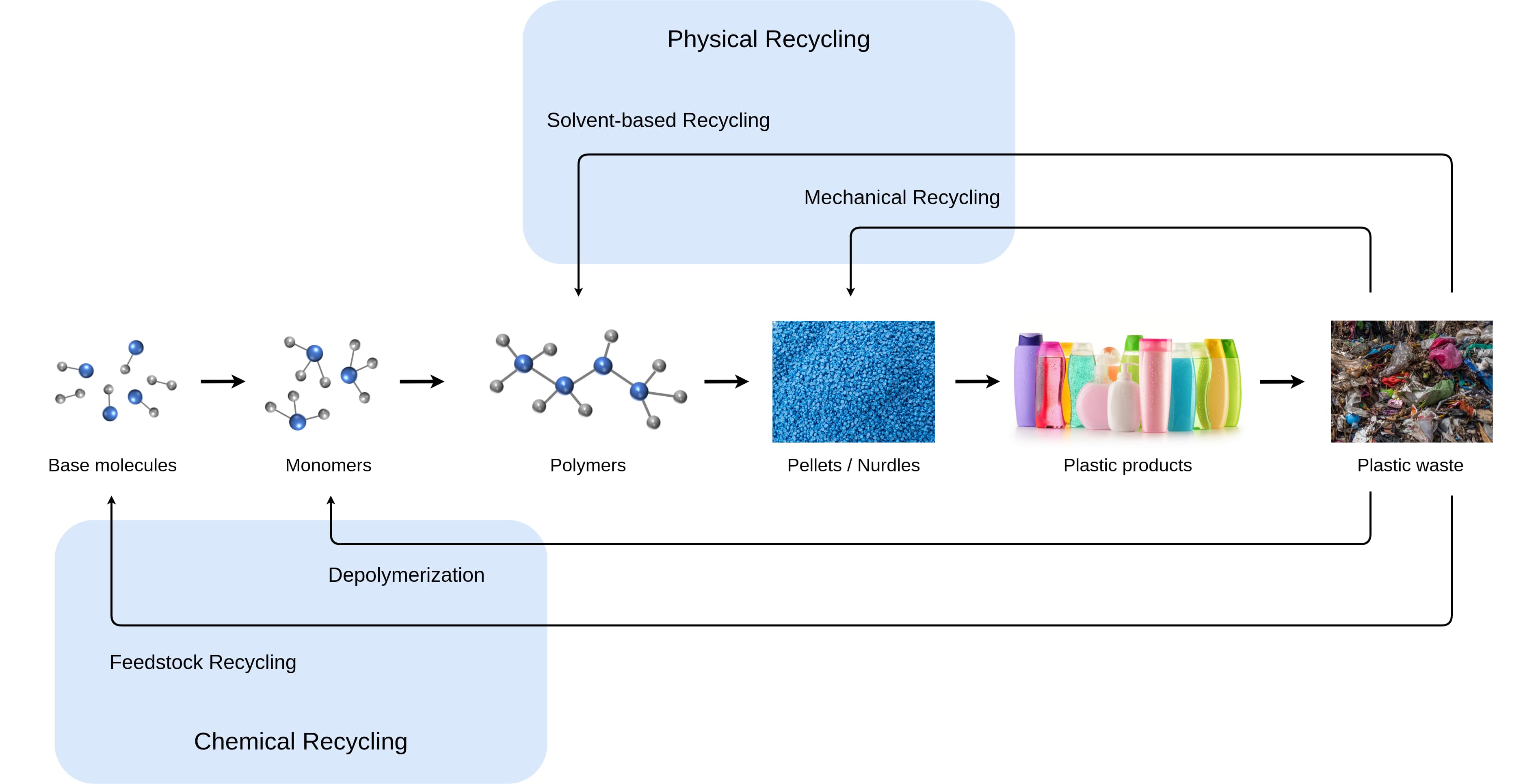 Chemical recycling methods include depolymerization (into monomers) and feedstock recycling (into base molecules). Chemical recycling plants don’t have to compete with virgin plastic producers, instead they can supply monomers or feedstock (base molecules) to them. The advantages of these methods are that re-assembled polymers are indistinguishable from virgin plastic, and that plastic waste can be converted into new plastics of another type. These methods fall under closed-loop recycling since no loss of quality occurs and there is no limit on how many times the same material can be recycled. The main disadvantages are low yields and high energy intensity.

Which is the best recycling method in each case depends on the plastic type, its contamination level and the goals set to be achieved. The costs and energy intensity of recycling increases “the further back you go” (see diagram above). If a recycling method requires a higher energy input than the original polymer had, then from an energy point of view it is best to make virgin plastic. The current recycling infrastructure for plastic waste is dominated by mechanical recycling, but it’s potential is limited to further increasing pellet quality in a financially sustainable way. Other recycling methods have a lot of potential and are expected to gain substantial market shares as complementary techniques to mechanical recycling.

Mechanical recycling methods generally produce high yields and are very energy efficient. The two main limitations that generally prevent these methods from qualifying as closed-loop recycling are contaminant removal capabilities and polymer chain shortening. Due to degradation of the long polymer molecules the same material can only be recycled about 4-7 times before the material produced becomes low quality. Chain extension methods that would remove this limitation are an active area of research. The main steps of mechanical recycling are:

The main steps of depolymerization are:

Feedstock recycling (into base molecules)

The main steps of feedstock recycling are:

Both pyrolysis and gasification involve decomposition of plastic at 350-550℃ with exclusion of oxygen, and fractionation by distillation. The output is oil, gas and char in different ratios depending on the type of technology and the type of input plastic. The naphtha fraction of the output can be used for virgin plastic production.

Biological decomposition is a stimulated biological breakdown of plastic by enzymes produced by microbes or fungi. The output is base chemicals and biomass. The latter can be used to produce chemicals, for example lactic acid. Lactic acid can be converted to polylactic acid (PLA), a biodegradable plastic.